How Gbemela Lost His "Down"
Gbemela is human. Or at least he once was! Now he is just different . . .
featuring
Gbemela

Gbemela was different. Though Gbevu and Gbeha were really animals deep down, Gbemela was human, or at least he was once. He still looked kind of human, but he had become a very backward kind of person.  A lifetime of behaving like a beast had made him gradually lose his sense of civilization, and now after hanging around Gbevu and Gbeha for far too long, Gbemela could barely remember to talk like a proper person. However when the other two Bush boys really needed to get their points across, they depended on Gbemela to do the translation so that other people could understand them. 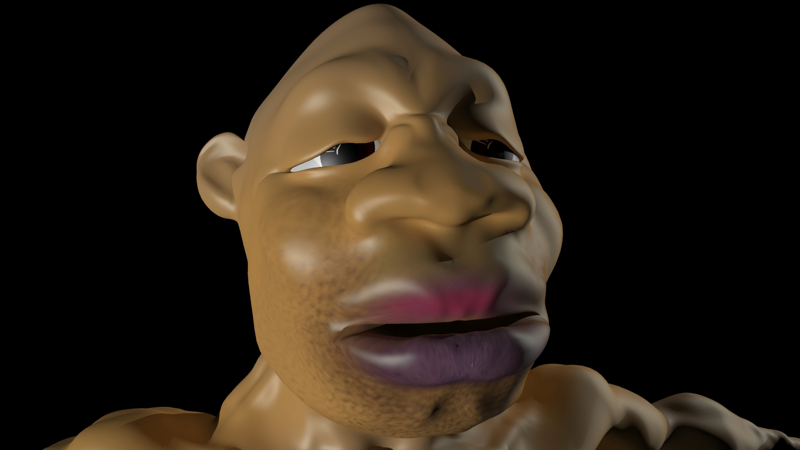 All three of them needed one another and each of them secretly admired the others. Gbemela was particularly envious of Gbevu's tail and he always wished he could grow one, because he noticed that when Gbevu was scheming and duping someone, he always wagged his tail from side to side. Poor deluded Gbemela thought it was Gbevu's tail that made all the difference in convincing the duped victim. Gbemela also admired Gbeha's frown because he thought it made the Pig look tough and rough. Gbemela was just happy these two thugs allowed him to hang around with them, though someone else might have been upset about the ill treatment that he received at the hands of his Bush friends.

You see, when Gbemela first wandered from civilization and got lost in the Koklokrom Forest, the first person who did not ran away at the sight of him was Gbevu. After being without company for a very long time, Gbemela was happy to see another being, even if this person had pointed ears and such sharp-looking teeth. But of course, Gbemela was not smart enough to be scared of anything. Gbevu on the other hand was surprised to see a human being who did not try to escape. So like reluctant friends or careful strangers, they grunted greetings at one another.

In those days, Gbemela still had on the clothes that he was wearing when he abandoned civilization. They were dirty but at least they kept the thistles off his skin. But Gbevu had only his doggy fur coat. Gbevu thought fast! Here was a chance to look more human, which would enable him to trick more people faster. So Gbevu started grunting furiously and motioning at Gbemela's trousers. This was the first time that Gbemela was hearing such animal noises, so it took him some time to catch on to what Gbevu was trying to get across.

Gbevu was trying to tell Gbemela that he was in the forest now and so should not be wearing trousers. Hmmmm! Gbemela scratched his head and tried to think, but the effort was too much for him. So he found it easier to just bend down, unfasten his buttons and take of the pair of jeans that had formerly been his Saturday night outing jeans. They had always been kind of tight anyway.

Whereupon Gbevu leapt on the pair of trouser and quickly slipped first one leg, then the other into them. They were kind of short for him and his tail wouldn't let him pull up the jeans any higher, but Gbevu nevertheless threw his head back and howled with happiness. Now he could also keep coins in his pocket, just like all the people he had been robbing. Gbevu turned and ran off deeper into the bushes, leaving Gbemela blinking bemusedly at the disappearance of his new "friend".