The Beat that cannot be Beaten
This is the drum that can't be beaten when it comes to talking . . . and he has other tricks up his trunk!
featuring
Ffffontonfffrom the Talking Drum

Ffffontonfffrom is a mystical living drum that was found wandering around the Koklokrom forest. A guerilla broom in General Cleaner's network had brought the earliest reports of “a strange fellow that hangs about in the forest … talks a lot ”. However, forest guerilla brooms are not very talkative people so it was difficult to understand just what he meant. Later on, other people said they had heard someone in the bushes talking and talking. Some even thought it was two people having an argument but later on it was agreed that it was all really just one voice. 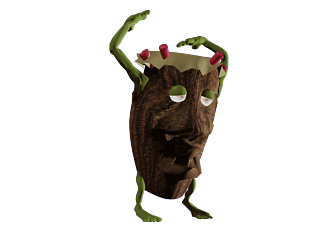 It was a long time before the Talking Drum had revealed himself after hiding from everyone in the Koklokrom Forest for a long time. For quite some time, people who went on picnics and walks in the forest had felt that someone was watching them. “Who’s there? What’s your name?” But there was no reply, just the noise of someone scuttling deeper into thicker bushes. When people realized that whoever it was kept a safe distance and never brought any harm, they left whoever to their whatever. Finally, the Talking Drum realized that he was missing out on all the good things by hiding himself away. One day at a picnic,when nobody expected it he had surprised everyone by coming out of the bush and walking up to the surprised group and saying “my name is Ffffontonfffrom”.

And since then he has never stopped talking.  The Talking Drum made it a point not to let his stammer prevent him from saying what he had to say. So it was difficult to tell if he never finished talking because his stammer slowed him down or if it is just because he has a lot to say. And now, no one is sure which part is his name and which part is a stammer so they just call him Talking Drum.

The Talking Drum, of course, likes drumming and dances quite a bit, too. Whenever the people of Koklokrom get together to have a party, The Talking Drum is often the band-leader, quick to drum a rhythm on his own head. Ffffontonfffrom tells stories of his life before he found himself wandering about Koklokrom Forest. He tells of how he lived with a whole family of talking drums just like him. Once he gets going… Ffffontonfffrom never stops.

It is is easy to forget about Ffffontonfffrom because he is always somewhere in the background talking. But the few who took their time to listen to Ffffontofffrom heard a lot of interesting things. Apart from talking a lot of sense, he also has a powerful secret: At times he can break into a hypnotic beat that enchants anyone who hears it, putting them into a trance where they have to march to this beat. Ffffontonfffrom uses this power only once in a long while, only when it is absolutely necessary and never to cheat anyone.

More Stories about this friend
No items found.
Other Stories by this Author
We are the Musky Toes
Higgledy Jiggledy Piggledy
GeeKnee Fowl is Here Today
Gbevu Smiles Back
How Gbemela Lost His "Down"
Bola and Rubbish go together
All about small
The Early Adventures of Sir Basil