Come to Koklokrom
A beautiful place to be
featuring
Koklokrom

Charley Chicken lives in Koklokrom. Koklokrom is a nice place to be with the grass growing so green and fresh. Even the sun feels happier when he gets to Koklokrom and so he slows down and hangs about in the sky above for a longer time. This make the Kokolkrom days seem brighter and longer, and it makes people who live there much happier. Of course, the moon gets her own back  by hanging lower in the sky and this makes the nights in Koklokrom something to remember, too. The stars too sparkle, very merry in their own way. 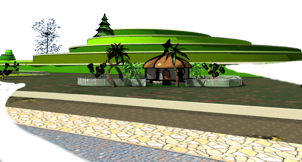 The people who live in Koklokrom love it as if it is the only town they had to live in so they take special care of the places in the town. Neat lawns and trimmed

Apart from wide roads that run through the town, there is a train track that runs over the bridge at Mama Lake and this is where the little train, the Koklokrom Express runs. It's not too much hard work to walk instead of riding, so the train usually carries the heavy load, with its iron wheels on iron tracks.

There is a stadium and an airport, though no one ever wants to really leave Koklokrom.

There is a lake where Charley Chicken and his friends like splashing. Because of its shape, it is named the Africa Lake, but many people also call her the Mama Lake because you can get all sorts of good things from her.  Now, even though Charley chicken does not like to admit it, the truth is that he is more of a chicken than a duck. So he doesn't swim all that  well, and some of his friends can't, either.  So they like the water to be kept very clean, just in case some of that water ends up getting gulped down in a swimming misadventure. So they make sure no one throws (or pours!) any rubbish at all into the lake. Besides, as they say, the fishes in the lake don't have dustbins and can't handle garbage, so why should anyone dump filth on them? Who wants to eat rubbish fish, anyway?

There is a lovely thick forest that no one is allowed to cut down. With so many old trees, these woods are full of mysteries, and some even say, all kinds of old magic. There is always something new coming out of the Koklokrom forest. But you should really watch out if you are walking around those parts, for they are many tricky things happening in the forest. You could even lose the shirt off of your back if you are not careful.