Not so Terrible
He sounds fearful but is he really Terrible?
featuring
Taribo Tygah

Terrible Tiger was one of the most misunderstood characters in Koklokrom. He lives near the Flower sisters and they often heard these terrible roars from deep in his house so everyone thought he was a permanently angry person. 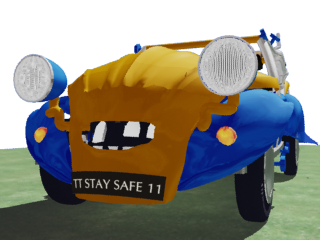 What was really happening was that Taribo Tygah was a very dedicated inventor who was completely passionate about his inventions. Whenever he tried a new experiment that didn't work just as expected he would let out a huge roar that would scare anyone nearby. He spent all his time fixing together bits of wire, plastic and metal that would make people's lives easier and hardly came out of doors and so remained a mystery. Even when he went out it was mostly at night so many people did not meet him to know that he was just a big soft-hearted tiger.

Taribo Tygah had invented the new telephone system that everyone in Koklokrom used, yet he never asked anyone to pay him, because in the end it had been a real easy invention for him.

He had also built a wonderful car that never needed to be filled with fuel and the wildest part of this tale is that the car actually knew when to stop and when to go even if the driver fell asleep behind the wheel. But the saddest part of this story is that one day Taribo had driven this car up into the hills of the Koklokrom forest and while he was there, he had figured out a way to build a giant Kite that could be used to... So in the end, the absent-minded inventor left the poor car behind in the forest where it is just waiting to be found again!

More Stories about this friend
No items found.
Other Stories by this Author
Come to Koklokrom
King of the Cockroaches
A Clean Sweep
Backyard Gardening
The Map