It is said that behind every successful man is a great woman. But did you know that behind every successful General there must also be good and capable lieutenants?  General Cleaner had a solid back-up team! That is why General Cleaner was super-successful, because not only did he have the great Bola Rina beside (not behind) him, he also had a crack team of dirt-destroyers.  HotRake, Scouros, Captain d'Vrooom,  Bojungles, Broomando, Dirty Hari, Whisxwish, and marching at their head, the very dignified OberSweeper. 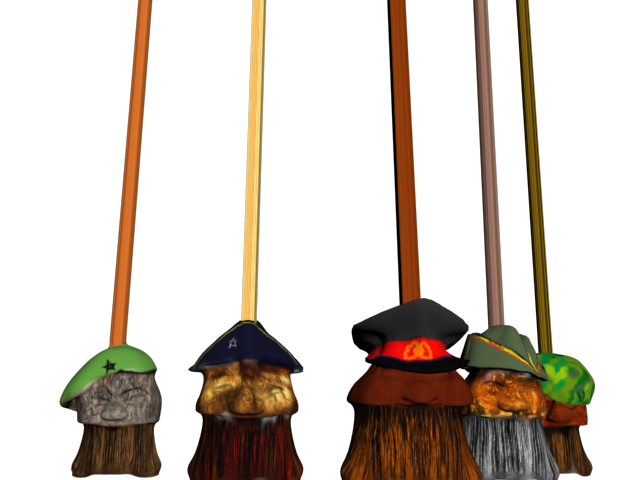 The chief-lieutenant for General Cleaner works with dignified efficiency! He was second-in-command after the General, and the leader of the rest of the Clean Brigade. In his days as a park broom, his flowing bristles brushed millions of fallen leaves into thousands of heaps. He was also very kind and once allowed a mother cricket to keep all her Little Crickets in his bristles. One fine day Obersweeper had just finished sweeping and gathering a huge pile of leaves. That day, nearby, the mayor had come to the park to make a speech. Some of the little Crickets were playing "catch me if you can" that day, so all of a sudden, Obersweeper had to sneeze ... You can imagine a mayor trying to look composed with thousands of leaves blowing all about him. And that is how Obersweeper lost his job and came to join the Clean Brigade.

Scouros, the Greek sailor broom. Scouros claim to fame was being Head of Hygiene aboard a millionaire's fleet of yachts. That is what he says about himself, but some filthy-minded brooms, a bit envious of his swagger, had spread a dirty rumour that he was just a reformed pirate broom ... something about how he used to clean hijacked ocean tankers. Whatever it was, Scouros never even behaved as if he had heard those stories and just went about his business of being a very stylish officer in the Clean Brigade.

Speaking of Style, you couldn't leave the dashing French-speaking Lieutenant broom out called Captain d'Vroooom. (He does not appreciate any part of that name being left out—not even one of the o's). His rival is Scouros; Captain d'Vrooom insists that Scouros is only swagger, whilst he, Captain d'Vroooom is "totally style". This may be true but the problem is that there are very few stories about Captain d'Vroooom because it is very tiresome to write or pronounce his full name every time, with all the o's! Why, just imagine, he had even been overheard telling off some poor fellow who "had spelt the apostrophe in his name wrong"! Such an insistent attitude makes it difficult for even his commanding officer to use his name when he wants to assign him duties. General Cleaner is wondering how to tell Captain d' Vrooom (oh, did I leave one out?) that he will shortly be assigned to Internal Affairs as adjutant to Whixswish ... Scouros, his arch-rival  would really enjoy that, of course!

More Stories about this friend
No items found.
Other Stories by this Author
Not so Terrible
Come to Koklokrom
King of the Cockroaches
Backyard Gardening
The Map